Ex Nihilo or ex-Parrotface? a note on the tangled origins of Monty Python's Parrot sketch 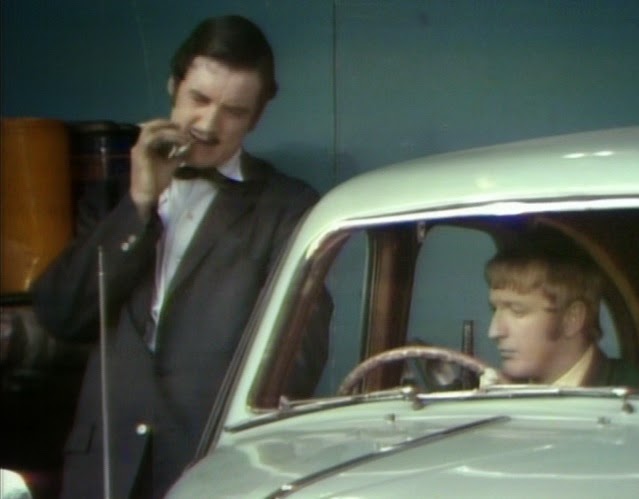 The origins of Monty Python's Parrot Sketch have been well documented, most recently in John Cleese's sober but enjoyable autobiography So Anyway ..., but as cowriter of Freddie "Parrotface" Davies's autobiography Funny Bones permit me to add a footnote.

The essence of the joke has been traced back to Ancient Greece, according  an article in the Telegraph, although I'm not entirely sure I'd go along with that:

A comedy duo called Hierocles and Philagrius told the original version, only rather than a parrot they used a slave. It concerns a man who complains to his friend that he was sold a slave who dies in his service. His companion replies: "When he was with me, he never did any such thing!"

It's not clear from the above whether the companion is merely an idiot rather than devious - and the latter is surely the point of the famed Parrot sketch: a shopkeeper willing to say anything rather than refund the customer.

So let's skip a few millenia to Michael Palin's supremely evasive car salesman (above) in a sketch in the one-off pre-Python show How to Irritate People; if you are unfamiliar with it you can see it here.

As is well known to aficionados, that situation was reworked for a Python sketch with the garage replaced by a pet shop and, at Graham Chapman's suggestion (though Cleese's autobiography is vague on this specific point), a parrot replacing the car as the faulty object. Apparently at one point a toaster had also been mooted, which suggests it took a while for the shop's identity to settle.

You will find occasional references online to the idea being stolen from Freddie "Parrotface" Davies. Any accusation of outright theft would be getting rather silly, as the late Colonel Chapman might have put it. Nevertheless, it's not beyond the bounds of possibility that Freddie's standup routine may have made a small contribution towards this enduring sketch.

It's quite conceivable that Chapman's idea of a parrot may have been inspired by a memory of seeing Freddie perform on TV, as he was a ubiquitous presence at the time. This had begun with a 1964 appearance on the talent show Opportunity Knocks: Freddie did a joke he had honed in the clubs about a furious but essentially idiotic customer complaining to a pet shop owner about a budgie he had been sold which didn't talk, as promised.

It wasn't original, just a favourite old joke - you can find a version as told by Terry Thomas here - but it was Freddie's characterisation of the two people involved which made it something special - and gave him a distinctive comedy persona in the process. Freddie's affronted customer, complete with homburg pulled down over his ears and that curious delivery, somewhere between a lisp and a rasp, was seen by around twenty million viewers in those two-channel days. It made him famous overnight. After that, the joke became indelibly associated with him and the customer was given a name: Samuel Tweet. 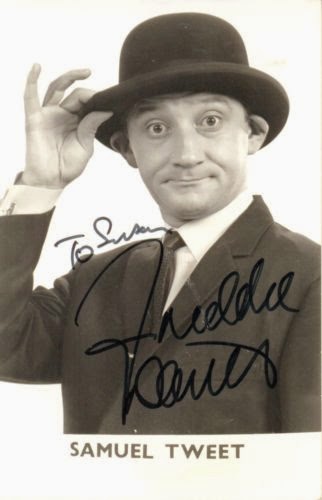 In later TV and live appearances Freddie performed variations on the joke, further altercations with the pet shop owner who persistently sold him "duff budgies" and others. In fact you can see one online here, taken from a a 1966 show at the ABC Theatre in Blackpool, where Freddie was doing a summer season. (Younger viewers may need to be informed that the Trill birdseed company's slogan was "Trill makes budgies bounce with health.")


So there you have it: my small contribution to Python lore. When Chapman made the suggestion which brought the sketch to life could it have been inspired by the man who became known as "Parrotface"?

Freddie Davies is presenting a performing masterclass in London on 31st May 2016 - details and booking here.