The comedian who inspired Freddie Davies 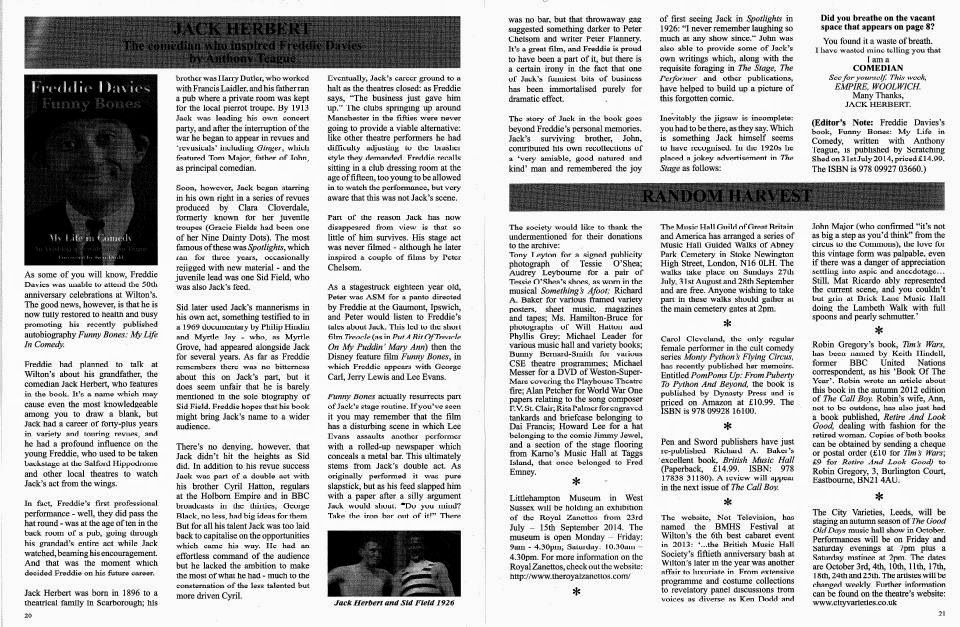 This is a slightly abridged version of the above article in the summer edition of The Call Boy, the magazine of the BMHS (British Music Hall Society), about Jack Herbert, Freddie's comedian grandfather who inspired him to go into the business. There are two substantial chapters about him in Freddie's autobiography - indeed, the book begins and ends with this forgotten but talented and original comic whose influence lives on via Sid Field, his straight man for several years. 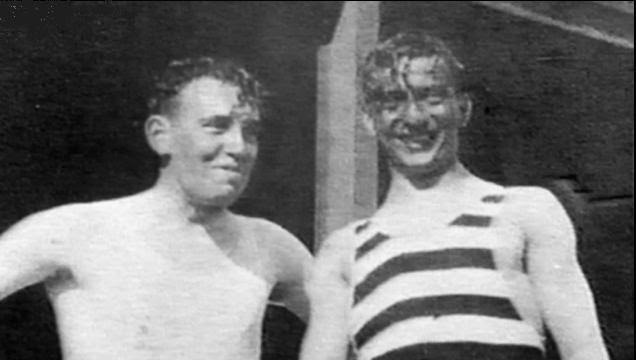 As some of you will know, Freddie Davies was unable to attend the British Music Hall Society's 50th anniversary celebrations at Wilton's Music Hall in September of last year. The good news, however, is that he is now fully restored to health and busy promoting his recently published autobiography Funny Bones: My Life in Comedy.

Freddie had planned to talk at Wilton's about his grandfather, the comedian Jack Herbert, who features in the book. Jack had a career of forty-plus years in variety and touring revues, and he had a profound influence on the young Freddie, who used to be taken backstage at the Salford Hippodrome and other local theatres to watch Jack's act from the wings.

In fact, Freddie's first professional performance - well, they did pass the hat round - was at the age of ten in the back room of a pub, going through his grandad's entire act while Jack watched, beaming his encouragement. And that was the moment which decided Freddie on his future career.

Jack Herbert was born in 1896 to a theatrical family in Scarborough; his brother was Harry Butler, who worked with Francis Laidler, and his father ran a pub where a private room was kept for the local pierrot troupe. By 1913 Jack was leading his own concert party, and after the interruption of the war he began to appear in revues and "revusicals" including Ginger, which featured Tom Major, father of John, as principal comedian.

Soon, however, Jack began starring in his own right in a series of revues produced by Clara Cloverdale, formerly known for her juvenile troupes (Gracie Fields had been one of her Nine Dainty Dots). The most famous of these was Spotlights, which ran for three years, occasionally rejigged with new material - and the juvenile lead was one Sid Field, who was also Jack's feed.

Sid later used Jack's mannerisms in his own act, something testified to in a 1969 documentary by Philip Hindin and Myrtle Jay - who, as Myrtle Grove, had appeared alongside Jack for several years. As far as Freddie remembers there was no bitterness about this on Jack's part, but it does seem unfair that he is barely mentioned in the sole biography of Sid Field. Freddie hopes that his book might bring Jack's name to a wider audience.

There's no denying, however, that Jack didn't hit the heights as Sid did. In addition to his revue success Jack was part of a double act with his brother Cyril Hatton,regulars at the Holborn Empire and in BBC broadcasts in the thirties; George Black, no less, had big ideas for them. But for all his talent Jack failed to capitalise on the opportunities which came his way.

Eventually his career ground to a halt as the theatres closed: as Freddie says, "The business just gave him up." The clubs springing up around Manchester in the fifties were never going to provide a viable alternative: like other theatre performers he had difficulty adjusting to the brasher style they demanded. Freddie recalls sitting in a club dressing room at the age of fifteen, too young to be allowed in to watch the performance, but very aware that this was not Jack's scene.

Part of the reason Jack has now disappeared from view is that so little of him survives. His stage act was never filmed - although he later inspired a couple of films by Peter Chelsom.

As a stagestruck eighteen year old Peter was ASM for a panto directed by Freddie at the Gaumont, Ipswich, and Peter would listen to Freddie's tales about Jack. This led to the short film Treacle (as in Put a Bit of Treacle on My Puddin' Mary Ann) then the Disney feature film Funny Bones, in which Freddie appears with George Carl, Jerry Lewis and Lee Evans.

Funny Bones actually resurrects part of Jack's stage routine. If you've seen it you may remember that the film has a disturbing scene in which Lee Evans assaults another performer with a rolled-up newspaper which conceals a metal bar. This ultimately stems from Jack's double act.

The story of Jack in the book goes beyond Freddie's personal memories. Jack's surviving brother John contributed his own recollections of a "very amiable, good natured and kind" man and remembered the joy of first seeing Jack in Spotlights in 1926: "I never remember laughing so much at any show since." John was also able to provide some of Jack's own writings which, along with the requisite foraging in The Stage, The Performer and other publications, have helped to build up a picture of this forgotten comic.

Inevitably the jigsaw is incomplete: you had to be there, as they say. Which is something Jack himself seems to have recognised. In the 1920s he placed a jokey advertisement in The Stage as follows:

Did you breathe on the vacant space that appears
on page 8?
You found it a waste of breath.
I have wasted mine telling you that I am a
COMEDIAN
See for yourself. This week,
EMPIRE, WOOLWICH.
Many Thanks,
JACK HERBERT.

There is much more about Jack in Freddie Davies's autobiography Funny Bones from amazon (paperback) or direct from Scratching Shed Publishing.